Tragedy has struck Eric Clapton's life more than once. During the recording sessions with his group Dominos, Clapton was devastated by news of the death of Jimi Hendrix; eight days previously the band had played a  version of "Little Wing" as a tribute to him which was added to the album. On 17 September 1970, one day before Hendrix's death, Clapton had purchased a left-handed Stratocaster that he had planned to give to Hendrix as a birthday gift.
Guitarist Duane Allman, Clapton's personal friend, was killed in a motorcycle accident on October 29, 1971, tragically ending his life at the age of twenty-four.
The Dominos' drummer, Jim Gordon, was an undiagnosed schizophrenic and years later he murdered his mother during a psychotic episode. Gordon was confined to 16 years to life imprisonment, later being moved to a mental institution, where he remains today.
In 1984, while still married to Pattie Boyd, Clapton began a year-long relationship with Yvonne Kelly.  They had a daughter, Ruth, born in January 1985. Clapton and Kelly did not make any public announcement about the birth of their daughter, and she was not publicly revealed as his child until 1991, at the funeral of his son Conor.
Boyd did not know of the existence of Ruth until 1991: "What cut deepest was that Eric had known about the child all along. While declaring undying love to me and pleading with me to go back to him, he had been paying Yvonne maintenance for the past six years."
Clapton and Boyd divorced in 1989 following his affair with Italian model Lory Del Santo, who gave birth to their son, Conor, in August 1986.  Boyd herself was never able to conceive children, despite attempts at in vitro fertilization.  Their divorce was granted in 1989 on grounds of "infidelity and unreasonable behavior."
The early 1990s saw tragedy enter Clapton's life again on two occasions.  On 27 August 1990, fellow guitarist Stevie Ray Vaughan, who was touring with Clapton, and two members of their road crew were killed in a helicopter crash between concerts.
Then, on 20 March 1991 at 11:00 a.m., Conor, who was four years of age, died when he fell from the 53rd-story window of his mother's friend's New York City apartment, landing on the roof of an adjacent four-story building.  Clapton's grief was expressed in the song Tears in Heaven (on the soundtrack to the 1991 movie Rush). The song was co-written by Will Jennings. He received a total of six Grammys that year for the single Tears in Heaven and the Unplugged album. 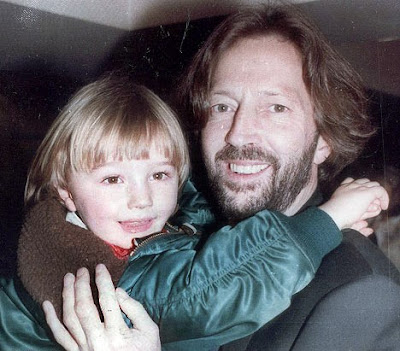