"Savoy Truffle" is a song written by George Harrison and performed by The Beatles on their White Album. Harrison wrote the song as a tribute to his friend Eric Clapton's chocolate addiction, and indeed he derived the title and many of the lyrics from a box of Mackintosh Good News chocolates. Supposedly all of the confectionery names used in the song are authentic, except cherry cream and coconut fudge. The chorus ("But you'll have to have them all pulled out after the savoy truffle") is a reference to the deterioration of one's teeth after eating too many sweets. The line "We all know Obla-di-bla-da" refers to the song "Ob-La-Di, Ob-La-Da" which appears earlier on the album.
Curiously, Eric Clapton's band was called after another sweet name, Cream. The band was named "Cream", as Clapton, Bruce, and Baker were already considered the "cream of the crop" amongst blues and jazz musicians in the exploding British music scene. Before deciding upon "Cream", the band considered calling themselves "Sweet 'n' Sour Rock 'n' Roll". Cream's drummer also had a sweet name: Ginger Baker.
Despite the sweet associations between George Harrison and Eric Clapton, they both loved the same woman: Pattie Boyd. 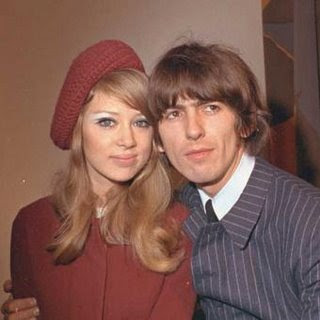 Patricia Anne "Pattie" Boyd (born 17 March 1944) is an English model and photographer, and the first wife of George Harrison of The Beatles, after whom she married Eric Clapton. In the late 1960s, Clapton became a close friend of Harrison, writing and recording music together. It was reported at this time that Clapton fell in love with Boyd. Clapton also fell in love with Boyd's 17-year-old sister, Paula, who moved in with him. Paula left Clapton when she heard "Layla", because the song confirmed that Clapton had been using her as a substitute for her sister.
She was the inspiration of love songs written by both George Harrison and Eric Clapton, most notably Harrison's "Something," and Clapton's "Layla" and "Wonderful Tonight"." Boyd also stated she was the inspiration for "Bell Bottom Blues," which Clapton reportedly wrote after he gave her a pair of blue jeans.  On 7 September 1976, Clapton wrote the famous love song "Wonderful Tonight" for Boyd while waiting for her to get ready to attend Paul and Linda McCartney's annual Buddy Holly party. Of "Wonderful Tonight," Boyd would say: "To have inspired Eric, and George before him, to write such music was so flattering. 'Wonderful Tonight' was the most poignant reminder of all that was good in our relationship, and when things went wrong it was torture to hear it."
Lennon, and Mick Jagger, were also said to have had crushes on Pattie, with Jagger admitting to model Bebe Buell in the 1980s (who had had a relationship with Jagger) that he had failed to seduce Boyd after trying for years.

This gorgeous video of Savoy Truffle includes numerous food-related images of The Beatles.